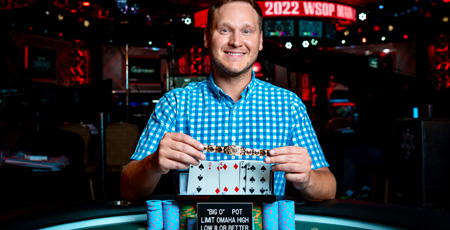 The final day of the 2022 World Series of Poker $1,500 buy-in mixed Omaha eight-or-better event began with a handful of multiple bracelet winners still in contention, looking to add to their collection with more hardware secured at the series. In the end, a debut winner emerged: Bradley Anderson. The Missoula, Montana resident overcame the field of 771 total entries, defeating Scott Abrams heads-up to earn $195,565 and his first bracelet.

“It is definitely surreal. Today was a tough grind. I had a big chip lead going into heads-up, and Scott chipped away at me, but I weathered the storm. I wasn’t really thinking about the money. I was focused on winning the bracelet,” Anderson told WSOP reporters after coming out on top.

This was the second-largest score of Anderson’s career, behind the $355,913 he earned as the fifth-place finisher in the 2014 ‘Millionaire Maker’ event. He now has nearly $630,000 in career cashes to his name.