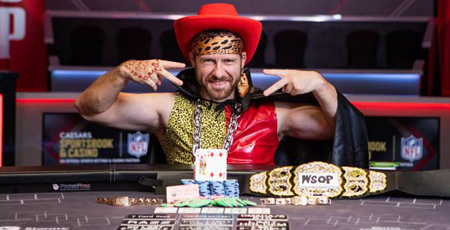 Dan ‘jungleman’ Cates achieved a historic feat at the 2022 World Series of Poker. The 32-year-old high stakes poker professional successfully defended his title in one of the most prestigious tournaments in the game: the $50,000 buy-in Poker Players Championship nine-game mix. After a marathon final day that lasted more than 13 hours, Cates emerged victorious with back-to-back wins, all while wearing a ‘Macho Man’ Randy Savage costume.

While Cates is the first player to ever win this tournament in consecutive years, he is not the first multi-time champion. Michale Mizrachi has won this tournament three times since it was first introduced in 2006 as the $50,000 H.O.R.S.E. event, while Brian Rast has come out on top on two occasions since the shift was made to add more games to the mix in 2010.

In 2021, Cates topped a field of just 63 entries in the tough mixed game tournament to earn his first-ever WSOP bracelet. Just 239 days later (as last year’s series was held in the fall as a one-off schedule change due to the pandemic) Cates came out on top of a 112-player field to earn his second career bracelet and the top prize of $1,449,103.

Cates, who is best known for his high-stakes cash game success both online and in the live arena, now also has nearly $11.7 million in career tournament earnings to his name.