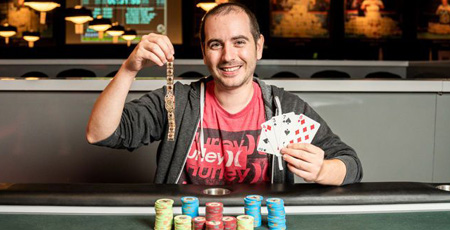 The Torrance, California native earned his second career bracelet, prevailing over a field of 383 players in Event #73: $1,500 Razz. Strelitz denied Lynda Tran the chance of being the first woman to win an open event in 2022 on his way to earning $115,723. His first bracelet came in the $5,000 No-Limit Hold’em event in 2019 (he also finished second in that event last year). This one, coming in a game that he’s studied hard to figure out, is that much sweeter.

“It’s awesome. I’m especially happy that it’s in a non-No-Limit Hold’em event since that’s what I’ve been concentrating on recently. But, yeah, No. 2 is great,” he said following his win.

After the final hand, when Strelitz got his first opportunity to pose with his newly-won jewelry, a friend made a makeshift banner that read “Razz,” a reminder that, though he’s primarily been a Hold’em expert throughout his career, he’s put in the work in this game.

“I’m not like an expert or anything, but I’ve been studying more since the last World Series with my friends,” he said.