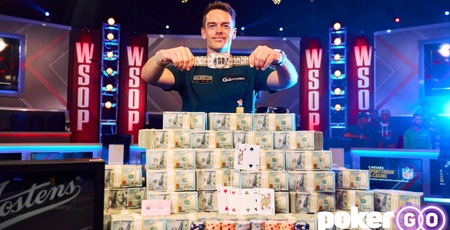 Norwegian Espen Jorstad has won the 2022 World Series of Poker Main Event for $10,000,000 after an enthralling final day display at Bally’s & Paris, Las Vegas. He defeated Australian Adrian Attenborough heads-up to top a field of 8,663 players, the second-largest in WSOP history. Attenborough would have to settle for $6,000,000 while third-place finisher Michael Duek takes home $4,000,000.

Jorstad becomes the first Norwegian to win the WSOP Main Event, going one better than compatriot Felix Stephensen who finished as runner-up in 2014, overtaking Stephensen at the top of the Norwegian all-time money list in the process.

The first thing Jorstad did after clinching victory? Call his mother.

“She was crying and had trouble speaking. She’s my biggest fan, so it was kind of emotional,” Jorstad told a crowd of reporters. “It feels really good.”

“My goal has been to reach into the High Roller scene and play more $25,000 tournaments and stuff like that. I’ve dipped my toes, but now I have a bigger bankroll to take some shots in those tournaments. I need to get in the lab and make sure I’m good enough to play them.