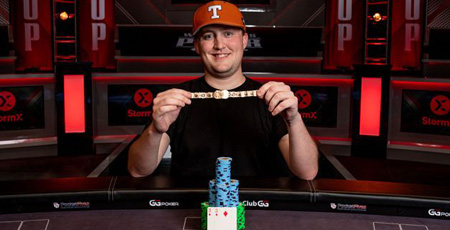 Michael Moncek, a native of Chicago, had three World Series of Poker Circuit rings on his poker resume. But he had never won the game’s ultimate prize, a WSOP gold bracelet. That has now changed after Moncek won Event #13: $1,500 Limit Hold’em, defeating Ben Ross after a back-and-forth heads-up match to earn the $145,856 top prize.

Moncek admits he had never played Limit Hold’em before this tournament. He had come to the WSOP expecting to play as many events as possible, and this one just happened to be the only event on the schedule that day.

“It feels awesome, especially in a game that I’ve never played before,” he said following his win. “I’m going to have to learn to play it now.”

Moncek had live tournament winnings of around $235,000 before this event. His best finish in a WSOP bracelet event was 16th in the Salute to Warriors tournament in 2019. Earlier this week, he had a chance to add to his career totals in a big way in the $25,000 High Roller No-Limit Hold’em tournament, but he was eliminated two spots shy of the money. He didn’t get too bothered by that loss. He just jumped right into the next tournament he could find. “You just have to go win the next tournament you play,” he said about overcoming that disappointment.