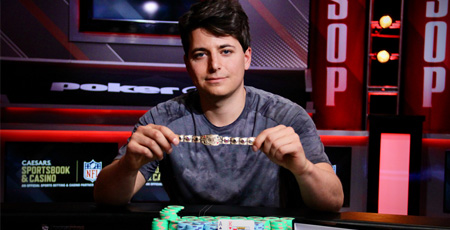 After Dan Smith won his first World Series of Poker bracelet a few events into the 2022 WSOP, Jake Schindler became the highest-earning tournament player in the world without a victory at the series. It took him just a few days to relieve himself of that distinction, though. Schindler came out on top in the 2022 WSOP $50,000 buy-in no-limit hold’em event, earning his first bracelet and $1,328,068 for the win.

This was Schindler’s fourth title of the year, including a $3.2 million payday as the Super High Roller Bowl Europe champion. Schindler has made ten final tables so far in 2022, accruing more than $7 million in earnings along the way, increasing his lifetime total to more than $36 million. He now sits in 10th place on poker’s all-time money list.

The shine from Schindler’s accomplishments, however, has been dulled by accusations that the 32-year-old poker pro was banned from online poker site GGPoker for cheating. Schindler was among a number of top pros accused of unethical conduct, along with current POY points leader Ali Imsirivoc and former all-time money leader Bryn Kenney. While Kenney has made public statements denying the accusations, Imsirovic and Schindler have not yet responded. After securing the bracelet, Schindler posed for photos but declined to answer questions from the media.