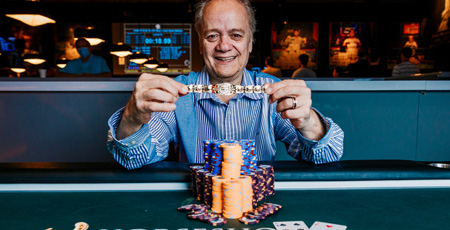 The 2022 World Series of Poker (WSOP) Event #71: $1,111 One More for One Drop was an incredible event that not only supported a great cause but also provided plenty of drama with a handful of big names making deep runs. At the end of five days, there could only be one winner from the 5,702-entry field to collect the famous gold bracelet and $535,610 in prize money: Mike Allis.

The Idaho native came out on top after an absolute battle with 2013 WSOP Main Event Champion Ryan Riess that went back-and-forth for nearly three hours before a champion was finally crowned in bizarre fashion.

His first-career bracelet is the cherry on top of a lifetime of poker, with this potentially being his final tournament in his World Series of Poker career. He plans on giving the majority of his prize money to his grandchildren.

“I was very tired and mentally fatigued. The dealers were really awesome helping me with my chip counts. I was very nervous (at the final table).

“I didn’t know if I was going to win or not, I said going into today that a lot of it would have to come down to my cards but I did feel comfortable playing such a good opponent because that guy (Riess) is terrific. If I had to play heads-up with him again, he’d probably kill me. I think I got very fortunate.

Event #71: $1,111 One More for One Drop Championship Final Table Results