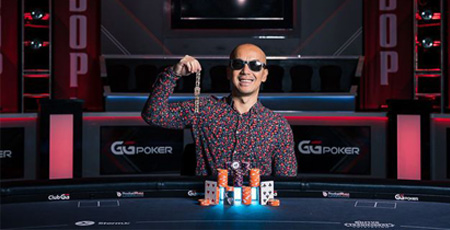 Nguyen outlasted 17 returning players on the tournament’s final day to defeat Ahmed Karrim in heads-up play to win $536,280 and his first WSOP gold bracelet. He came into the final day as the chip leader and finished the job in dominating fashion, scoring several knockouts to maintain pace atop the leaderboard.

“It was a rough start for the series,” Nguyen said in his post-win interview with PokerNews. “I was 0-5 before I min–cashed one. Then I went 0-26 or 27. Overall it was a pretty bad year.”

Nguyen saved his Summer in a big way with the largest win of his career.

“I’ve actually been on a year-and-a-half downswing. For me to come this far in the last tournament of the series is a dream. It’s awesome.”

Nguyen had a lively rail, and he promised them a party whether he won or lost. Before he makes a decision on entering the Tournament of Champions, Nguyen has an obligation to fulfill.

“I’m going to take my rail out to eat and find something fun to do,” he said.