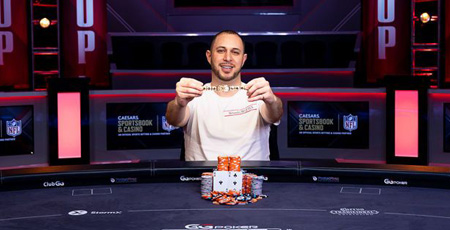 If the ace of spades is the prettiest card in the deck, a king is right up there for Paul Hizer. Twice at today’s final table of Event #51: $400 Colossus the Englishman had his tournament life on the line. Twice a king peeled off to save him. It’s the one card that made Hizer the newest World Series of Poker bracelet winner and $414,490 richer.

Hizer has been a professional poker player for around six years and played recreationally for several years before that. But he had never won a tournament before, despite $474,000 in career winnings before this event. He had made it to heads-up play four times but had come up short each time. That all changed today, as Hizer was the last man standing in a mammoth field of 13,565 players.

“It means a lot,” Hizer said following his win. “Played many tournaments. Had lots of deep runs. But I’ve never actually won a tournament outright. I don’t know if many people know that about me. I’m sure my close friends do. And maybe today was just written in the stars and I was meant to go all the way. I felt really confident, I felt like I had a really good game plan, and I’m just really thankful that it worked out.”