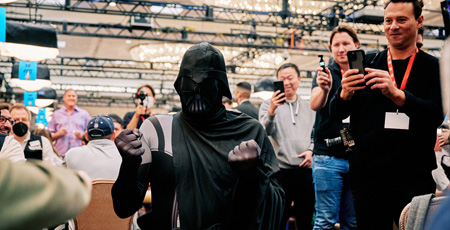 Phil Hellmuth has had quite a few memorable entrances to the World Series of Poker main event, and he attempted another Thursday afternoon in Las Vegas.

In typical Hellmuth fashion, the 16-time bracelet winner was making a late arrival to the tournament, starting on day 2. With an announcement from Tournament Director Jack Effel and John Williams’ Imperial March playing over the loudspeakers, Hellmuth entered the room dressed as Darth Vader.

Perhaps some were upset with the distraction of Hellmuth’s entrance, or maybe it was the presence of the dark side, but either way, Hellmuth was booed as he took his seat.

Unfortunately for Hellmuth, the dark side failed to bring him any luck on the felt. He was forced to change when he realized he couldn’t actually see his cards through his mask.

He lost a big pot with pocket kings against another player’s wheel and couldn’t get anything going after that. According to him, he didn’t win a single pot during his approximately 90 minutes in the tournament. On his final hand, Hellmuth was all in with K-J against Jeff Frerichs’ pocket sixes.

The flop of K-10-7 was great for Hellmuth, as was the J on the turn improving him to two pair. But the 6 on the river ended his day.

“The force was not with you today,” joked recent $1 million mystery bounty winner Matt Glantz.