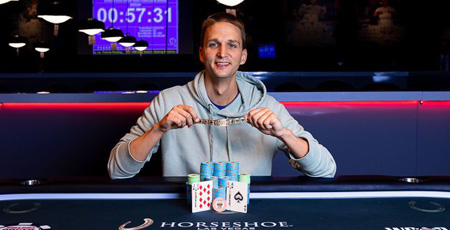 The biggest $10,000 Pot-Limit Omaha Championship in the history of the World Series of Poker attracted a record attendance of 683 unique entries and the biggest slice of the $6,368,975 prize pool was awarded on the final day, which brought back five contestants. Troha was the second-shortest stack upon return and still had 42 big blinds at his disposal, yet the action was fast-paced from the get-go.

At two points on the final table today, Troha needed to hit a two-outer to survive and did so both times against eventual runner-up Dudani en route to his inconceivable victory.

With prior career WSOP earnings of $270,226, this is far and away Troha’s biggest career tournament score.

When asked if he can put into words what the victory feels like, he was somewhat lost for words initially. “Probably not, I am usually not a man of many words at the table. I have been coming out here for a lot of years and haven’t won any [bracelet], hopefully this makes up for all of that,” Troha said shortly after his victory.

Also featured among the final five were Norway’s Joachim Haraldstad, Tom Hu and Michael Duek. All of them were eliminated by the red-hot running Dudani, who started the final day as the chip leader but was ultimately unable to close it out after a one-sided heads-up duel with Troha. He had to settle for a consolation prize of $770,556, which was still the far biggest cash in his live poker career.