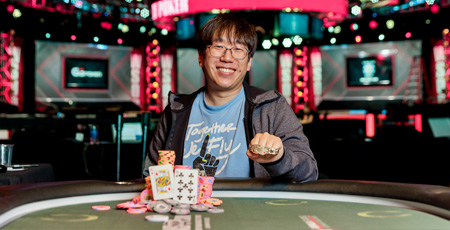 Just weeks ago, Young Sik came in second place for his career best score of $203,949. Now, weeks later, he stands as the winner of the Mini Main event for $594,189 and his first WSOP bracelet.

“I came into today with a 10 big blind stack,” the new champion said. “I wasn’t expecting too much out of it, but it turned out great.” The California resident prior to this victory, possessed $716,460 in career tournament earnings. He will now see his earnings climb to over $1,000,000 on Hendon Mob, cracking the top 200 on the California all time money list. “I liked it better being on the short stack,” he said about his play. “When there is a shorter stack, you feel more ICM pressure, but when you are the shortest, you can just play.” Sik ended by saying he will play the main event this year.